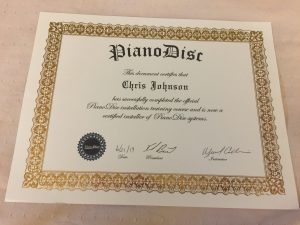 in a small town outside Boston, Mass. The seminar focused on installing Piano Disc systems in normal pianos so they work like the old player pianos. I was also taught how to service them.

Later in July, I attended the 62nd Piano Technician’s Guild Annual Convention and Technical Institute in Tucson, AZ. I was among 600 attendees including piano service specialists, manufacturers and suppliers.

“Each year, our Institute Directors craft a well-rounded program,” newly-elected PTG President Paul Adams, RPT* told me.  “Everyone left energized and anxious to try out a new technique.   Everyone knows that just one technological tip was worth the trip.”

An annual event held since 1958, the PTG Convention is the world’s largest piano technology convention.  Next year it will be held in Orlando, Fla., and I hope to attend again.

While I was there, I had the opportunity to play on several Forte pianos which were over 200 years old!  I also took some time to take a day trip to the mountains. Check out some of the pictures below.